This weekend, I walked from the Brighton Marina to about the Kings Gardens (Hove) and back. The walk roughly took about one and half hours each way, because I stopped every now and again to take in a scene and take photographs. This blog post is the catalogue of some of the photos I took. 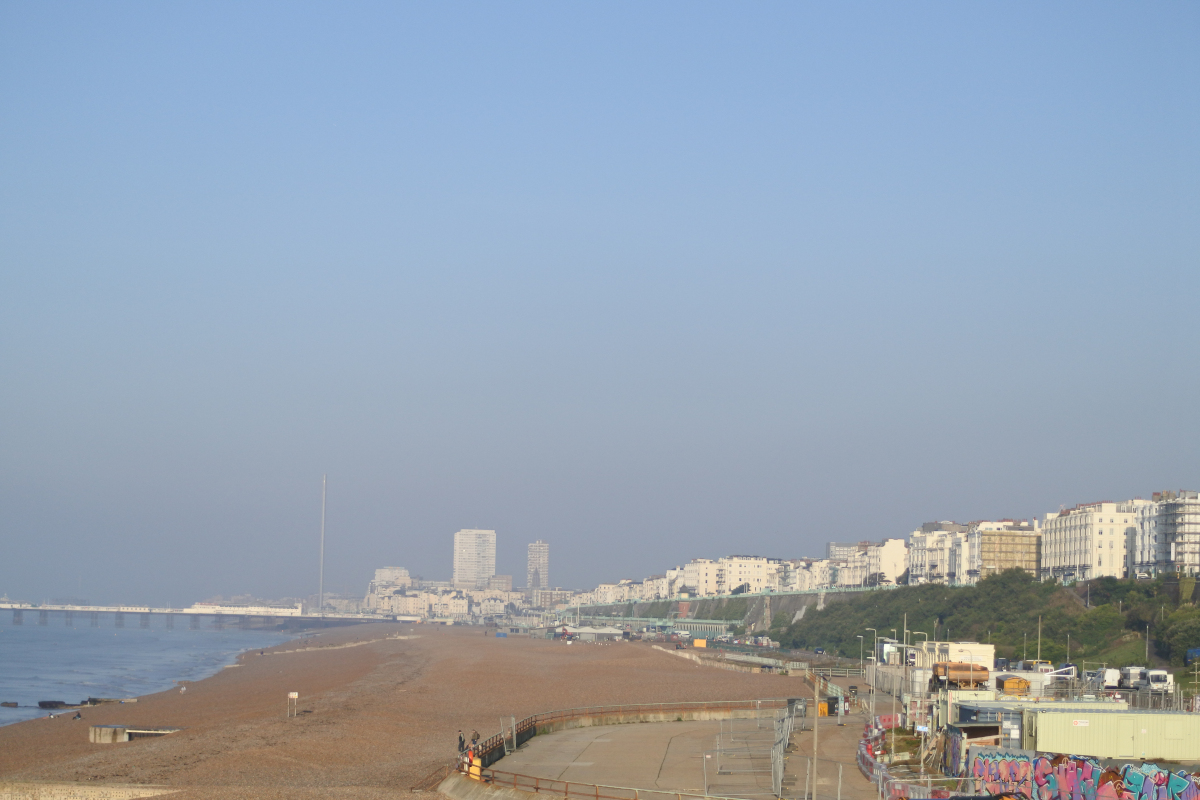 View from the Marina Car Park: This is the view from the top floor of the Brighton Marina car park. Some of my previous blog posts Graffiti - Brighton Under Cliff and Brighton Marina Restoration Project describe the immediate area.  The start of the walk isn't particularly scenic, as can be seen, but it progressively gets better. This area is due for a complete makeover soon anyway, so the visage should improve, tremendously, next year.

Villas along the Marina Parade 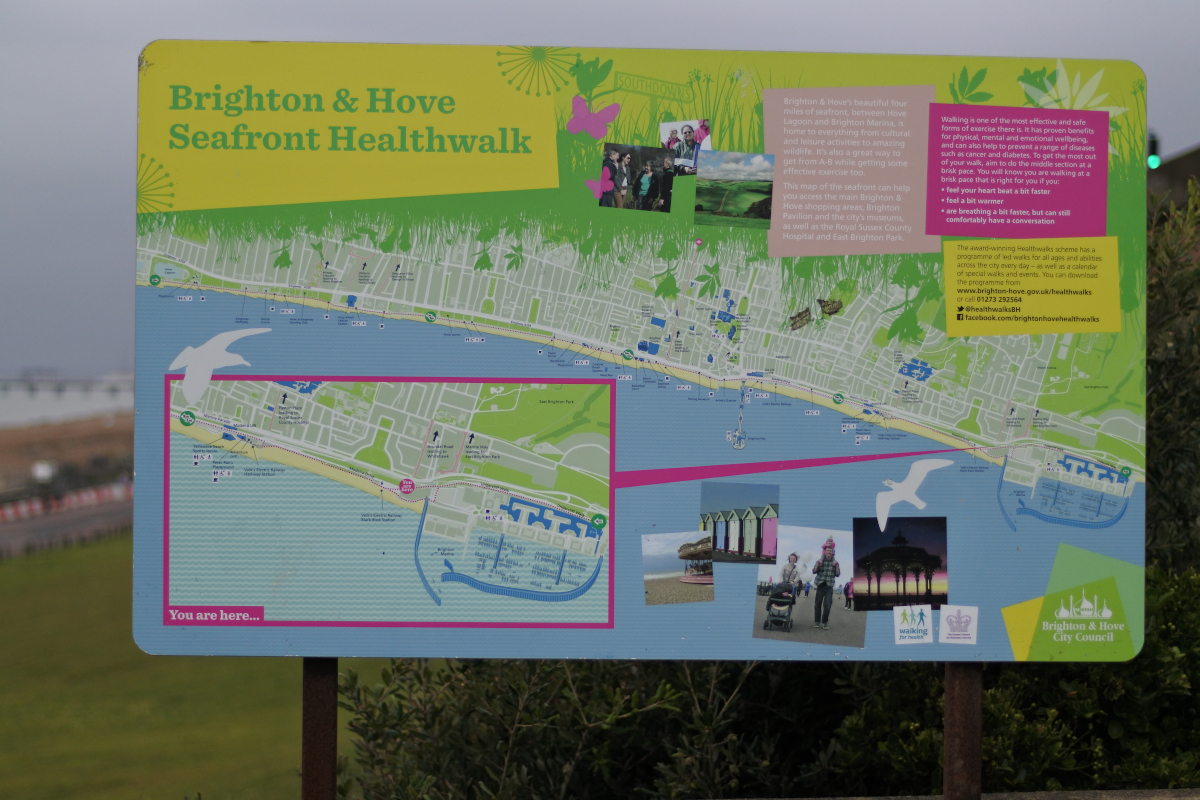 Brighton and Hove Seafront Health Walk: According to this placard the walk is described, as a health walk and to be fair it is! It's a pleasant, unbothersome walk that starts along the part of the Marina Parade (A259)  that runs alongside the terraced villas. At the beginning of the walk is an ASDA, useful to stock up on those energy boosting supplies! 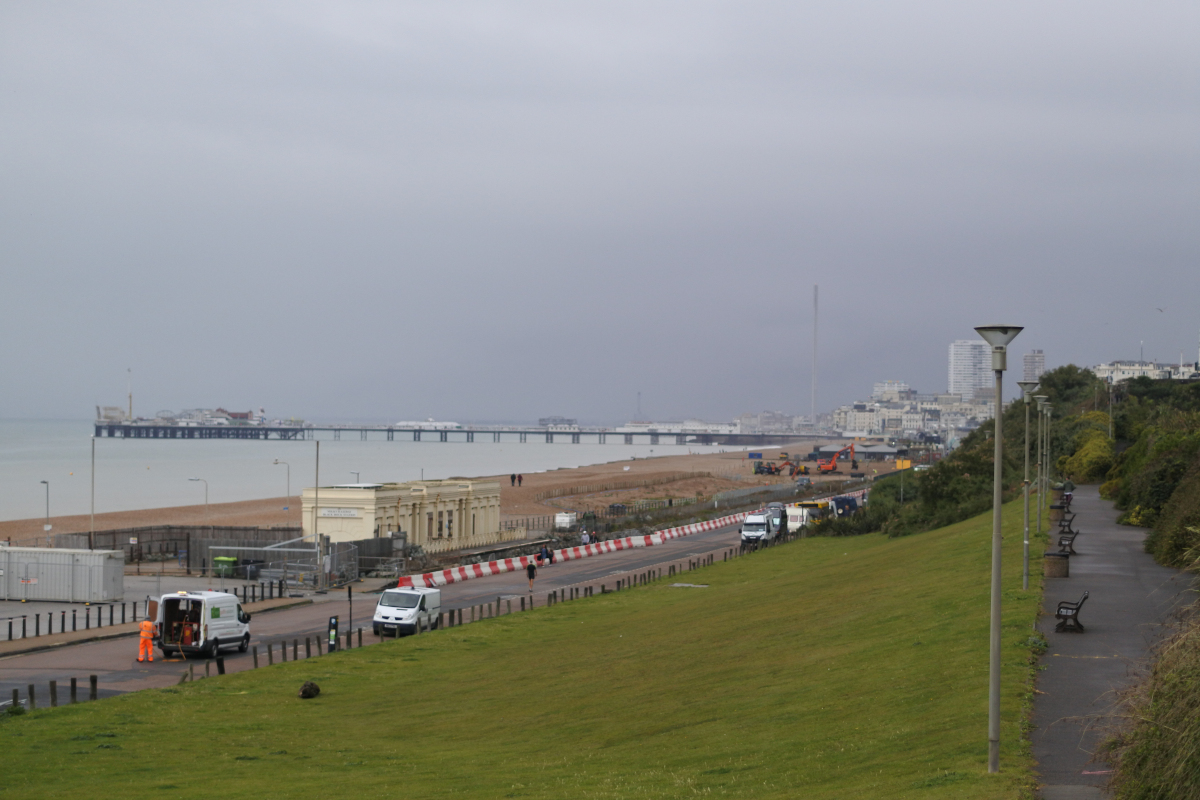 The Train Stop: The building on the left, adjacent to the red and white bollards type things, houses the toilets. Useful in case one has taken too much fluid onboard and is desperate to go. The seaside train also  stops at this building. This is useful if you're approaching the toilets from the pier end and the walk to the toilet is anticipated to take too long; The train journey could save you from an embarrassing moment. 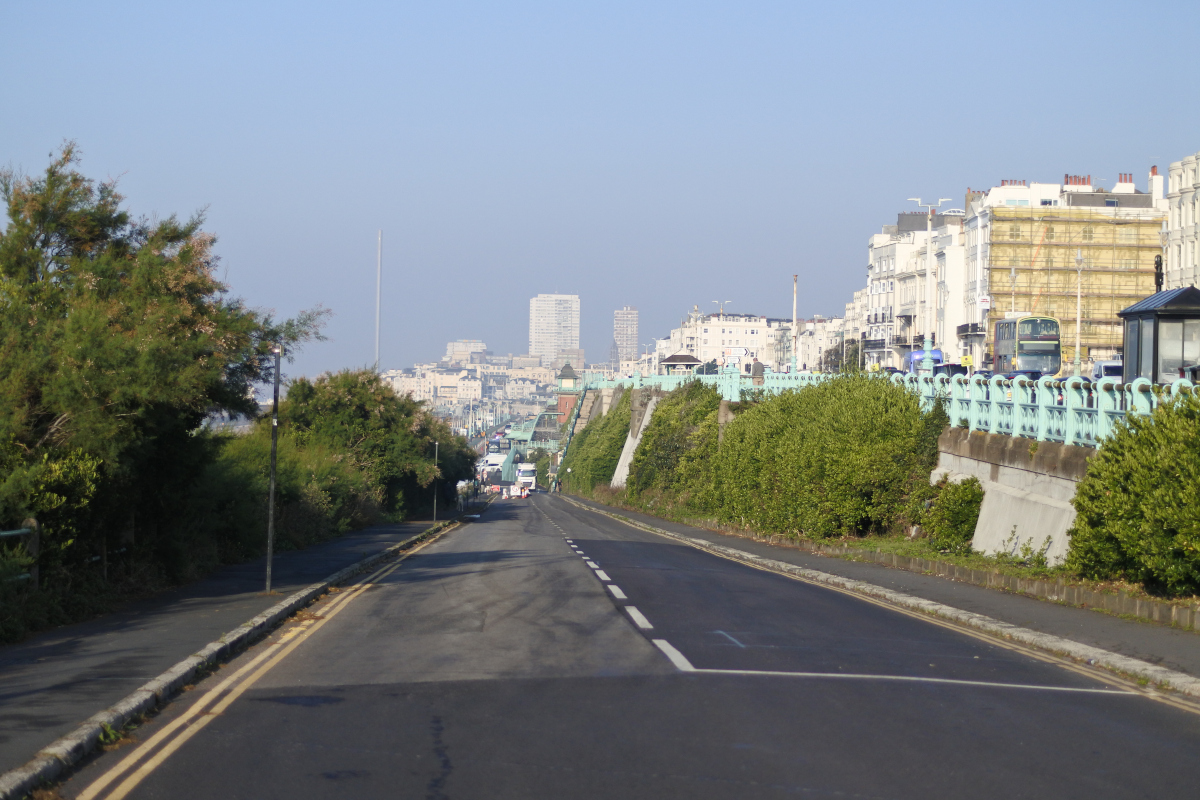 The view from the top of Duke Mound: This road leads to Madeira Drive, which has some popular drinking spots, a gym and the Concorde II performance club. It's quite a popular route for joggers to take, too. I decided to walk along the Marine Parade this morning and not the Drive. Marine Parade has more interesting things to observe. Also, climbing and descending the stairs to get to the Parade, from and to the Marina under-cliff, adds some additional exercise 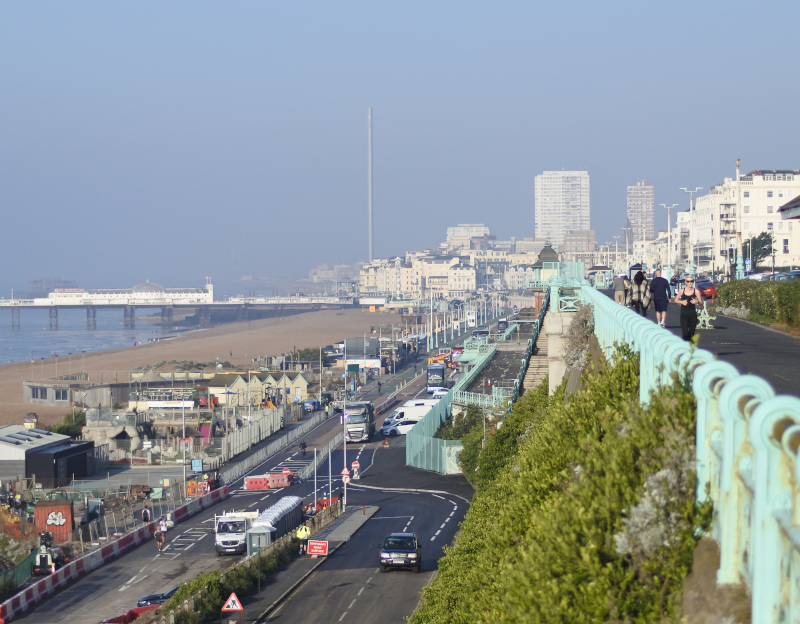 Brighton Pier: As the walk takes one closer to the Brighton Pier the view begins to become interesting, as more people are encountered; Great for people watching. The parade is another popular jogging route and it offers a great view of the the drive, below. 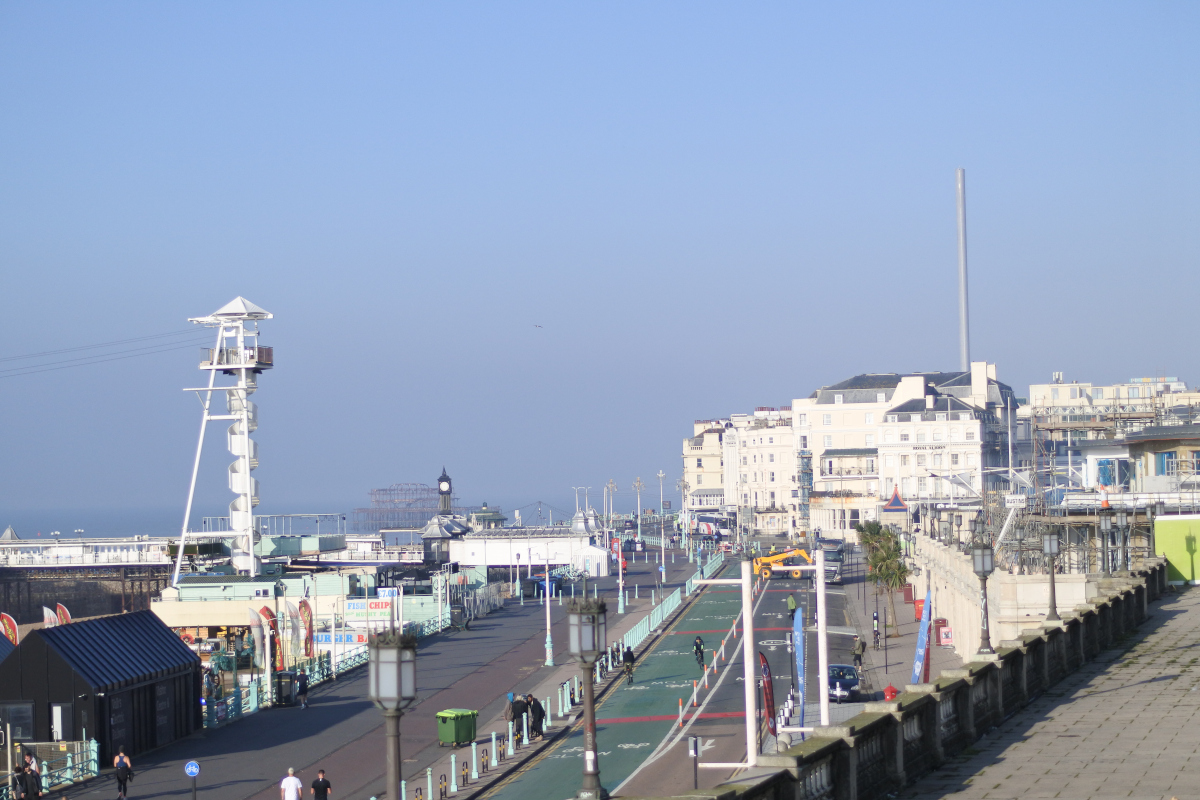 Brighton-Half Marathon Route: Madeira Drive was closed to vehicular traffic this day, as it was being prepared for the finish of the Brighton Half-Marathon (13/10/2021). I opted not to enter the half-marathon this year, as I've done in the preceding years! Maybe, after attempting the Brighton health walk a few times, I might be tempted. 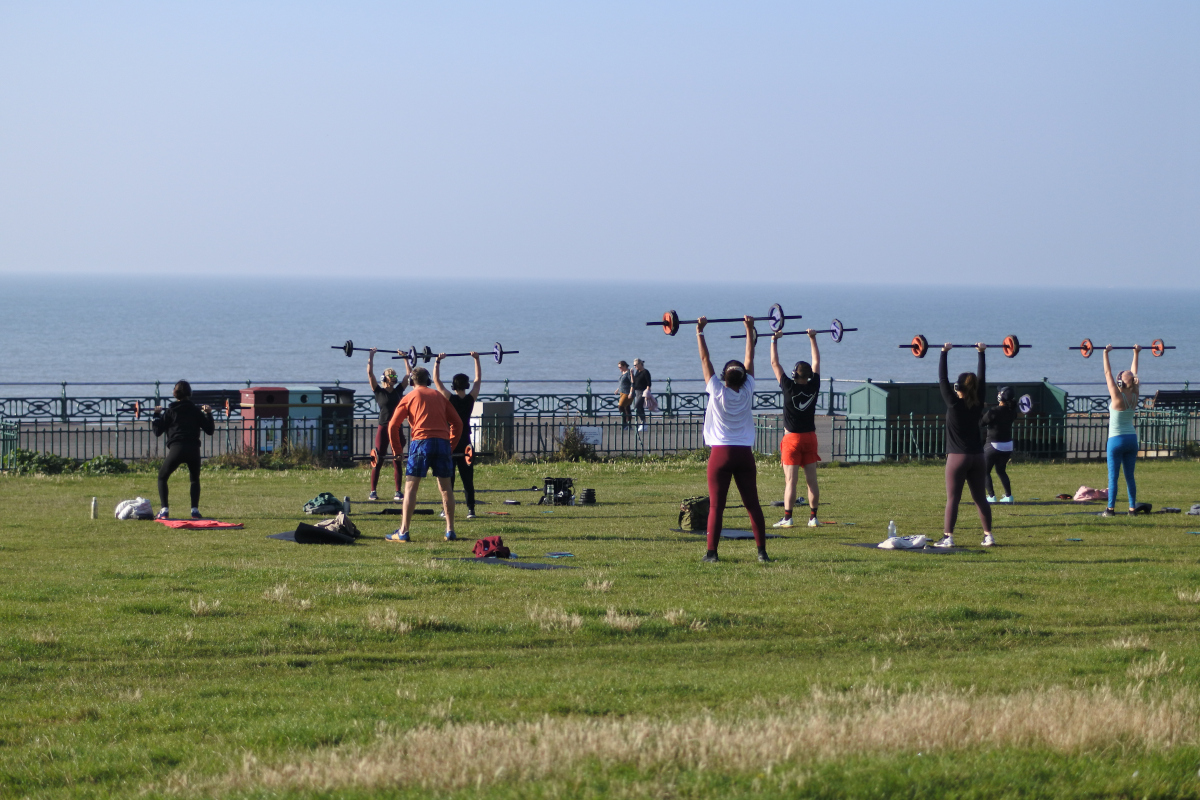 Seafront workout classes: Just incase you're not convinced that the health walk has done enough, to improve your health, you may be able to top-up with a weights class. Since the pandemic it is not unusual to see people exercising outdoors in organised groups. This particular class looks like a variant of a Les Mills weights class. Do you think one of the participants is slightly out of sync with the rest of the class?

Parkrun Finish: The building in front (on the right in the image above) is a useful landmark, as it indicates that about an hour has passed since the beginning of the walk. The area to the left seemed to be quite busy. I think it is the finish of the Brighton Seafront 5K Saturday Parkrun. It took about  an hour and a half to walk to the building ahead, before I turned back.